This is our dog, Stirling.

I know it’s probably not immediately obvious, but Stirling is a giant suck. He’ll be turning six on June 30, 2019, and you can find more photos and videos of him on Instagram.

After several months of intermittent limping (lameness), Stirling experienced a complete rupture of the cranial cruciate ligament (CCL) in his hind right leg on May 3, 2019. 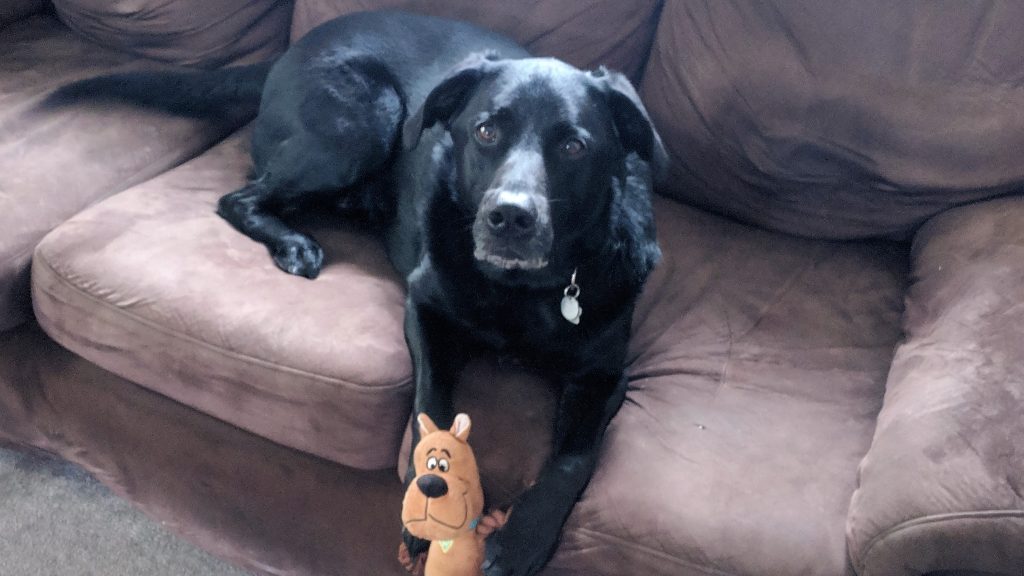 At the time I am writing this, it has been exactly two weeks since Stirling came home from tibial tuberosity advancement (TTA) surgery at Upper Canada Animal Hospital (UCAH) in Niagara-on-the-Lake, performed by Dr. Jim Turpel.

This is my review of the care that Stirling received. If you are considering TTA surgery (or UCAH in general) for your pet, I hope you find this post helpful.

Back in April, our local veterinarian at Borderview Veterinarian Hospital walked my wife and I through a few different options to correct the lameness in Stirling’s hind leg.

Based on a positive local reputation, as well as heartwarming videos like this one…

…we decided to book a consultation with Dr. Jim Turpel at UCAH for Tuesday, May 7.

Thankfully so, because, as I mentioned above, on the evening of Friday, May 3, Stirling’s partial tear became a complete tear when he excitedly jumped off the couch for dinner.

We tried to move up his consultation (and surgery date), but could not.

Our local veterinarian prescribed Stirling a painkiller, but that was about all we could do until Tuesday morning arrived. 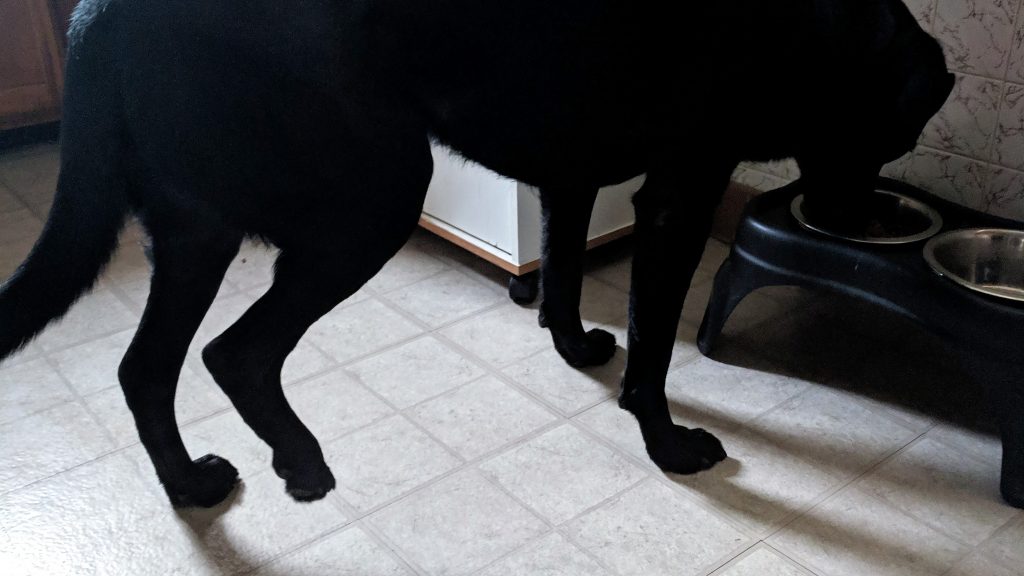 Here is Stirling eating his dinner that night on three paws.

Realizing that he couldn’t be allowed to (and likely wouldn’t be able to) get back on furniture or climb stairs for the remainder of the weekend, our family decided to camp out with him in the living room. We installed baby gates, flipped couches, and barricaded ourselves together. 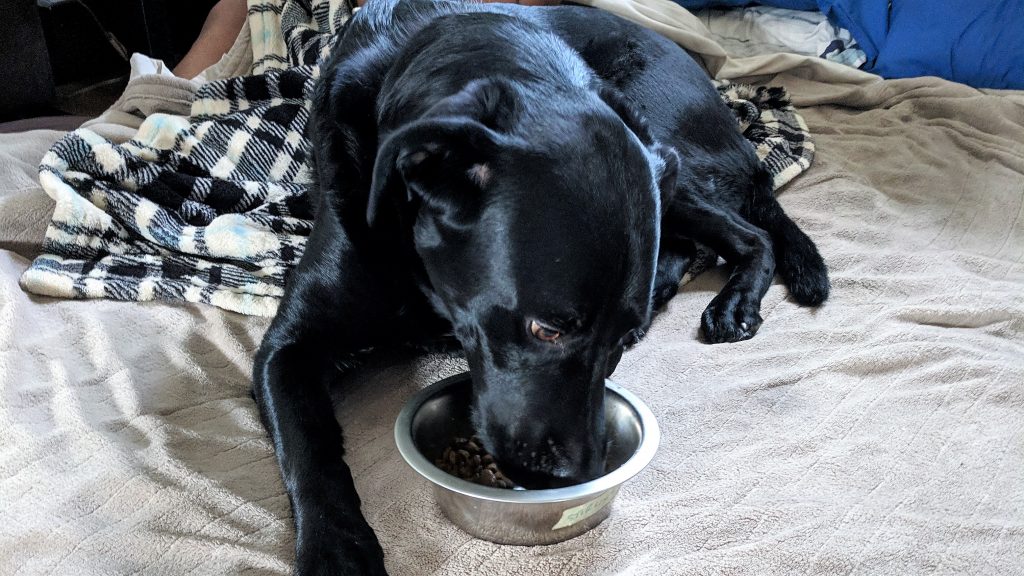 Here we are on the living room floor, where we tossed a mattress and slept overnight. Stirling got his breakfast in bed the next morning.

I don’t know if you’ve ever had the misfortune of watching such a big, beautiful animal (your best friend) stagger around in such obvious pain, but the morning of May 7 couldn’t come fast enough. Even though it was intended to be a consultation to start, we had already made up our minds that Stirling would be going in for surgery ASAP.

You bring in your dog then, if you’re going to move forward with surgery, you simply leave your dog behind and come back for him the next day.

Now, in case you aren’t aware, Dr. Turpel is like the Jedi Master of performing TTA surgeries. He’s done something like nine hundred of them with fabulous results and hundreds of glowing five-star reviews (see Google and Facebook). And this particular morning wasn’t my first time talking with Dr. Turpel, either.

When I’d first reached out to UCAH to book the consultation back in April, Dr. Turpel had called me almost immediately and spent the better part of a half hour answering questions and dispelling misconceptions about TTA surgery. Super nice guy!

He was just as thorough the morning of May 7. He spent close to an hour assessing Stirling and answering questions for my wife and I.

Dr. Turpel explained that, after surgery, in order to recover the full use of his leg, Stirling would need to…

The fee for Stirling’s surgery (around $3,300 CAD plus HST) was all-inclusive, meaning that we paid one single fee for the surgery itself as well as the eight-week aftercare program to follow.

Dr. Turpel also assured us that he and his staff would be available to answer our questions and concerns at any time, even after regular business hours. Post-surgery, he told us, we would be provided with his direct email address to use in the event of emergency.

Dr. Turpel had called us right after surgery (on May 7) with an update — that everything had gone according to plan! He promised that a staff member would call us the next morning (on May 8) with another update.

Spending the night without Stirling was tough, to be honest. But, true to Dr. Turpel’s word, a staff member from UCAH called us first thing the next morning to:

We eagerly went to get Stirling the afternoon of Wednesday, May 8 and we couldn’t believe it — he could already walk on his back leg again! Just like in the videos! Only a little bit and, boy, was he ever out of it (drugged), but he could stand and walk!

A different doctor, Dr. Erin Kanvera, did Stirling’s discharge appointment. She taught us how to do all the physiotherapy he would need, how (and when) to administer the drugs he was being sent home with, and even gave us a custom “discharge report.”

Yes, the staff had prepared a detailed multi-page booklet — featuring real photographs and x-rays of Stirling — that included a complete day-by-day checklist to follow.

And, much like speaking with Dr. Turpel, Dr. Kanerva took her time with us and made sure to address any questions, comments, and concerns we had.

She even told us that Stirling had been an excellent patient and that some of the staff had taken photos with him. We were sent these images by email later that night: 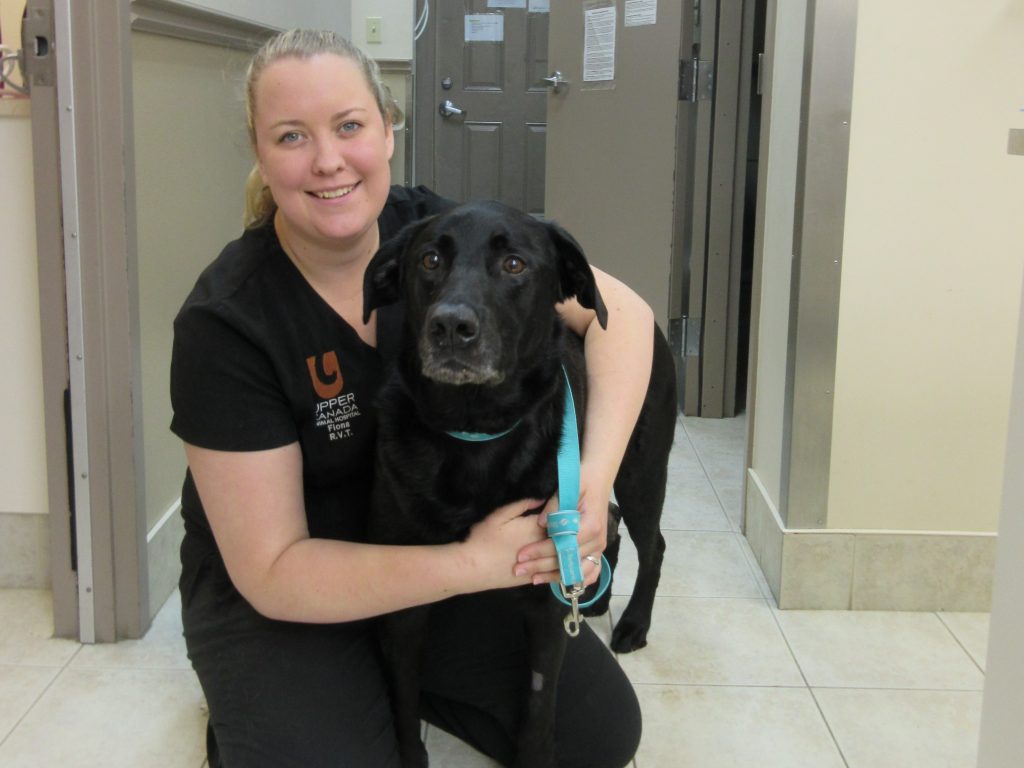 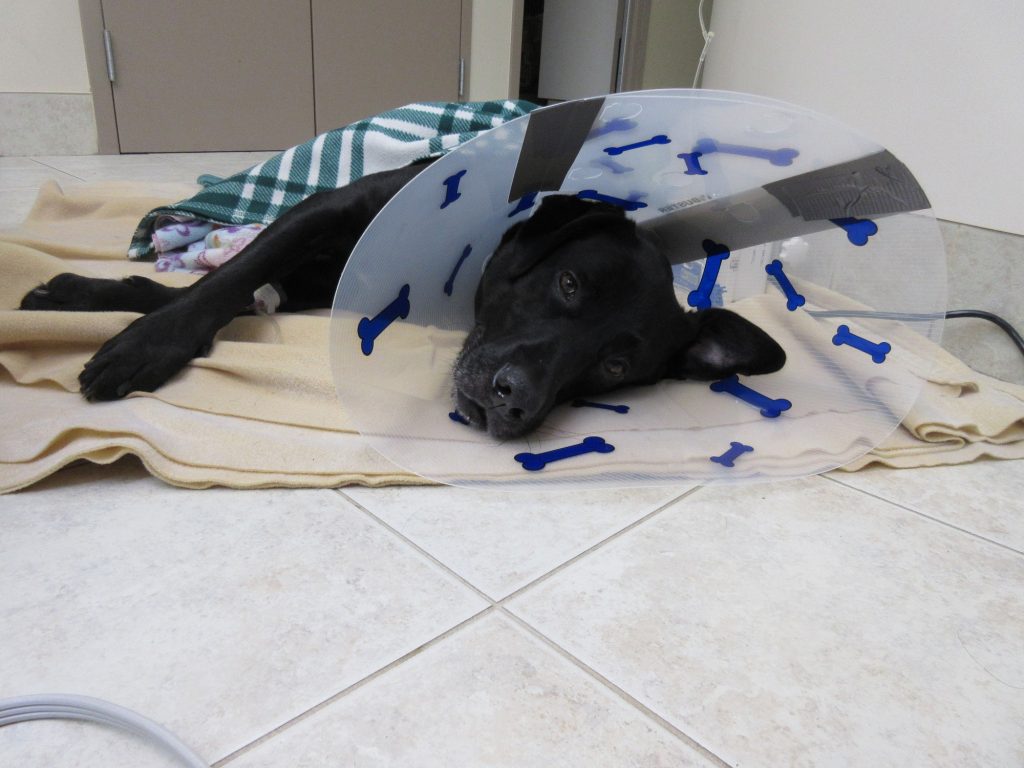 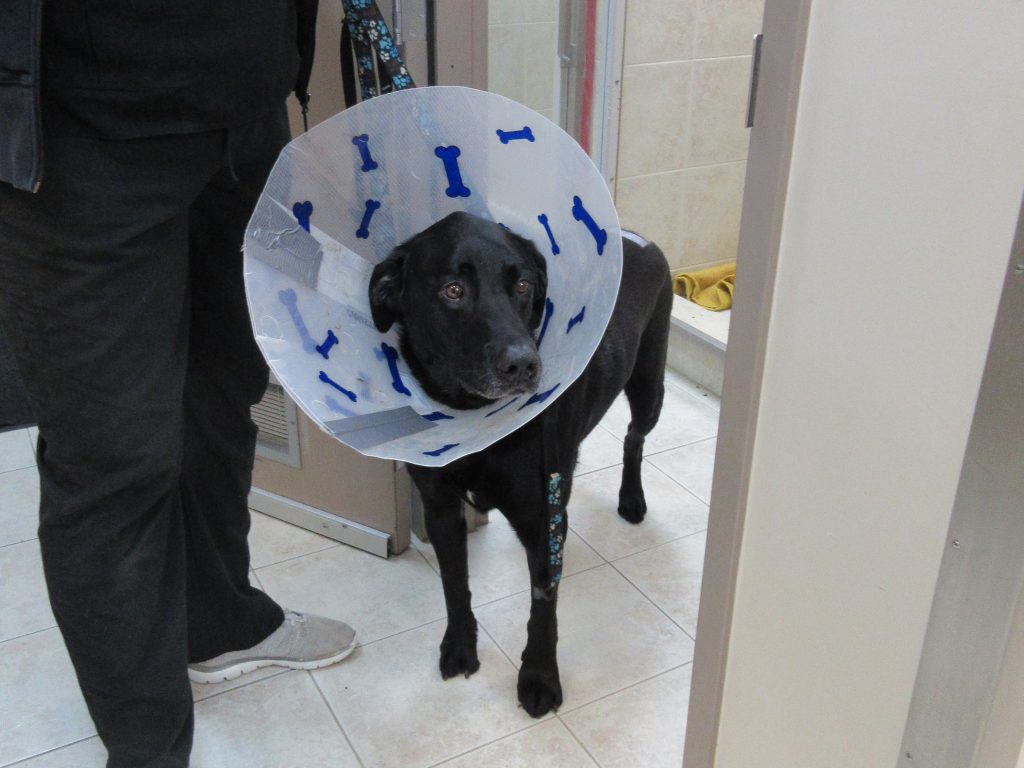 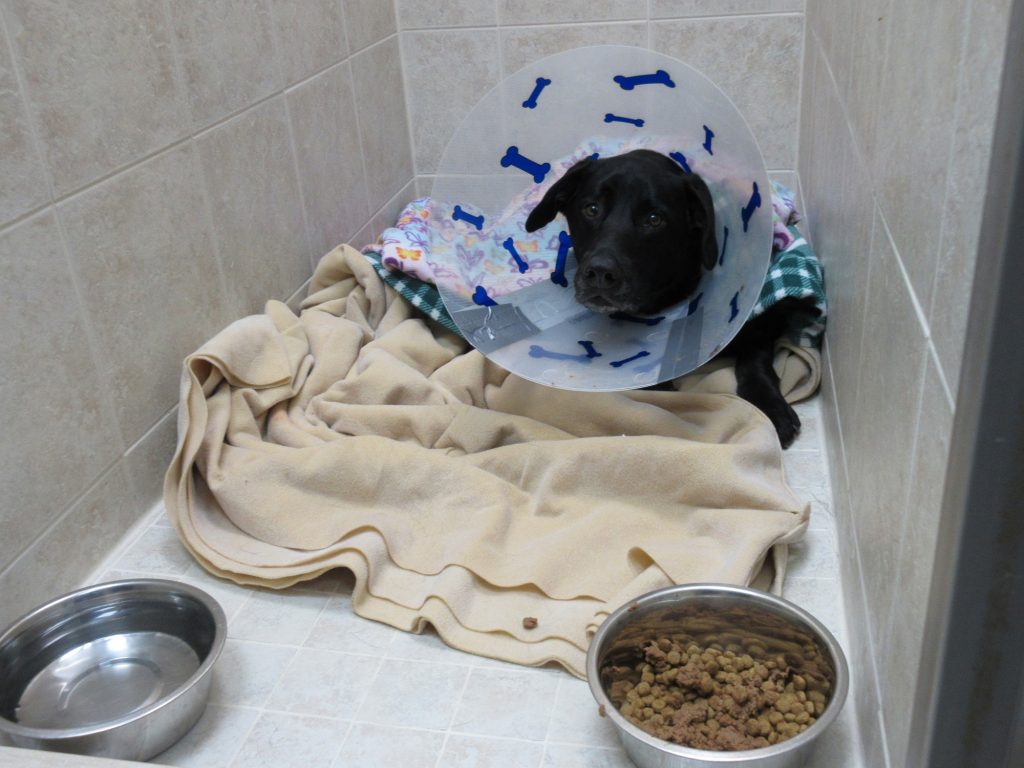 We were overwhelmed to see how kind the staff had been to Stirling.

More than anything, we were excited to have Stirling home again.

For the next two weeks, we decided to remain barricaded in the living room with Stirling. 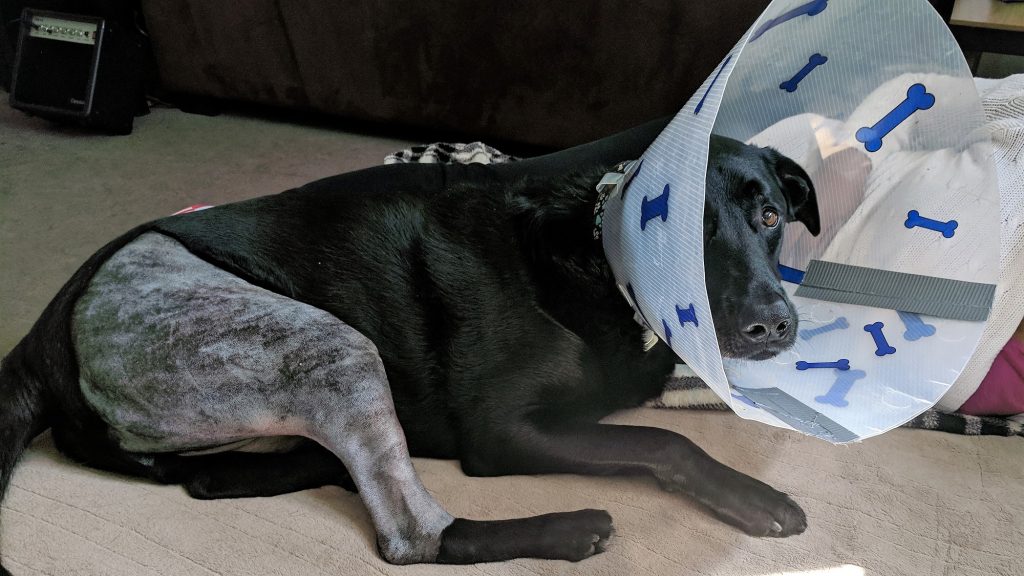 Aside from doing his physiotherapy three times per day, we wanted to make sure that Stirling didn’t try to climb furniture or stairs, or jump (his favorite activity), or get too excited if somebody came to the door.

Not that we minded. It was a bonding experience for our family.

The hospital called and emailed often, checking in on Stirling, which was awesome. And even though it wasn’t a true emergency, I sent photos and videos (mainly of the surgical site) to Dr. Turpel a few times. He almost always responded within a matter of minutes (usually with a phone call) and always seemed enthusiastic to speak with me.

So, earlier today, Stirling returned to UCAH for his first followup appointment. We thought that, perhaps, he would show fear at returning to the scene of the crime (so to speak) but he couldn’t wait to go inside and see all his new friends (the staff).

Again, we met with Dr. Kanerva, who indicated that she was very happy with Stirling’s progress — he was already putting a healthy amount of weight on that back leg! She promised us another check-in call around the four-week mark and, just as soon as the sutures were out, we were headed home again.

If either of my dogs ever needs surgery down the road, I wouldn’t hesitate to return to UCAH and Dr. Jim Turpel:

Yes, it will take a bit more time for Stirling to completely heal, but he’s expected to make a full recovery in as little as eight weeks (total).

In other words, right around his sixth birthday, Stirling will once more be able to run around and play just as he always has. And that, to us, is worth more than anything.

Brent is a sales representative with RE/MAX Niagara Realty Ltd., Brokerage. He’s the host of The Fort Erie Podcast and proud to call Fort Erie his home.